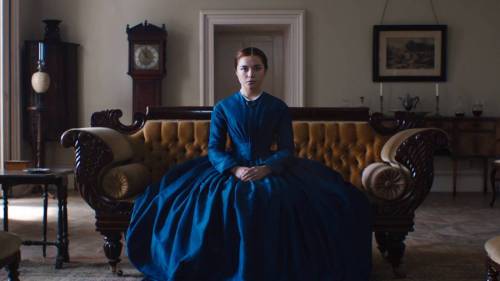 Adapted from Nikolai Leskov’s book “Lady Macbeth of Mtsensk” (1865) by Alice Birch, Lady Macbeth keeps the action in the same period but shifts the story from Russia to northern England. As the title suggests, it is a thematic reworking of the character from Shakespeare’s famous Scottish play, although some might see more similarities with Charlize Theron’s character in Patti Jenkin’s 2003 thriller Monster. This is a black widow story and Katherine is a femme fatale in the truest sense. Its investigation into a corrupt feminine power within an oppressive marital system renders the film dark and brooding, and at times quite brutal … but it’s thrilling to behold.

Katherine is a chattel, bought as her husband says, “along with a piece of land not fit enough for a cow to graze upon.” He, along with his grumpy father (played by the wonderfully earthy Christopher Fairbank), keep her under their strict set of rules.  Indeed, there is very little joy here. When Katherine strikes up an amorous relationship with a farm-hand things don’t go down too well. It is one of those films where everyone is a nasty piece of work … except the poor housemaid, Anna (Naomi Ackie), who finds herself in the middle of the hostilities and acts as the film’s only form of moral compass.

Director William Oldroyd, a relative newcomer to feature film set, has breathed some fresh air to the staid old period drama. He comfortably ratchets mood and tension without any musical score, which is also a testament to the wonderful work of cinematographer Ari Wegner. There is plenty at play in Lady Macbeth’s visual style, not least Katherine’s character who is illustrated with an evocative use of camera and lighting, allowing Pugh to work a commanding performance. Pugh’s slightly unhinged portrayal is the perfect foil for this enthralling piece of psychological period cinema.

Golf has never been my thing.  The concept is simple but, as many know, in practice it is a very difficult and frustrating game.  Perhaps telling a story about the game is no easier, as Tommy’s Honour returns a mixed scorecard.

Pamela Martin’s first feature screenplay has seen the fledgeling screenwriter transfer her writing talents from the New York offices of Playboy magazine to the windswept greens of St. Andrews. Quite a significant change of scenery, one would think.  Based on the book of the same name by Kevin Cook (Pamela’s husband), Tommy’s Honour tells the true story of Old Tom Morris and his son Tommy—both historical juggernauts of the modern game of golf.

Young Tommy Morris, played by Scotland’s rising star Jack Lowden (Dunkirk), is a renegade among the golfing fraternity. His desire to see golfing competitors elevate themselves above their role as mere chattels for the “Gentlemen” who wager on their results, proves a difficult task. Thankfully he’s one of the world’s best—a useful skill for a man who champions pay equity and a softening of the class difference within the seemingly impenetrable golfing society.  Tommy is fiercely independent and ruffles plenty of feathers, while his father looks on seemingly helpless to sway his fervent son.  Tommy’s extracurricular activities of drinking, goofing around, and his love for an unfavourable woman named Meg (played by Ophelia Lovibond) derail his golfing ambitions, with the latter having far reaching consequences.

Unfortunately the story seems to cast Tommy’s father, Old Tom Morris (Peter Mullan) into the margins a little too often.  He isn’t really given his due as a course designer, and the film clearly opts to tell the more dramatic (and sellable) story of his son. Shame, because Old Tom Morris’ story deserved a more thorough exploration.