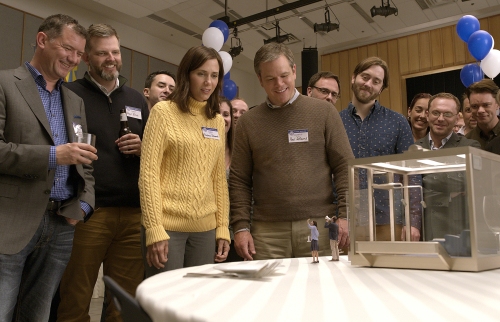 What if you could be shrunken to a miniature version of yourself? It’s not the first time the concept has graced the silver screen and as you might expect, Downsizing ends up asking more questions than it answers. Nonetheless, in an interesting take on human reduction, Director Alexander Payne (Sideways, The Descendants) has taken this well-used idea and wrung out a surprisingly bleak look at the possibilities.

Matt Damon plays the disgruntled Paul Safranek, an Occupational Therapist who along with his wife (Kristen Wiig), are finding it increasingly difficult to get ahead financially. After much deliberation, they decide to undergo the irreversible procedure of “downsizing”—a new technology invented by Norwegian scientists in the hope of turning the tide of human consumption.

Interestingly, the film is more concerned with exploring the environmental and humanitarian impact of downsizing rather than having fun with the shrinking concept itself.  And although it has its playful moments, this is far less Honey I Shrunk the Kids and more High-Rise … well, ok maybe not that aggressively grim.  But it paints a nihilistic world where human society inexorably gravitates towards a life of pleasure to the detriment of the planet’s health—the new invention simply providing people with a further reason to live a life of hedonistic excess rather than using it as an opportunity to reverse the damage done.

Despite the film’s mildly depressing outlook, Safranek’s tale does ultimately deliver a positive message—one that encourages us to focus on individuals in need rather than the world’s forlorn situation. It is a noble message which unfortunately is muddied by Downsizing’s rather loose and disjointed delivery.  A mishmash of different genres renders the film an unsatisfying experience as it struggles to settle on a single tone.  It swings from romcom to sci-fi drama and then shifts gear into a soft disaster flick, creating a tonal disparity that separates rather than coalesces the film’s themes. It’s an interesting attempt at one of the more unique takes on the subject, but it simply tries to cram too much in.  Perhaps the film could have done with a bit of downsizing itself.