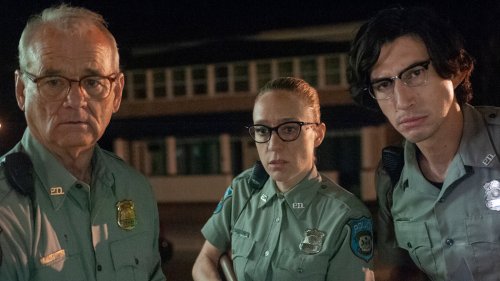 It’s hardly surprising that Jim Jarmusch has finally made a zombie flick. It is a sub-genre that many filmmakers have dabbled in and Jarmusch is certainly not shy of turning his pensively paced films into genre movies (eg. Dead Man as a Western). Certainly, this isn’t his first film about the undead. Notably, he sent two love-struck vampires, Tilda Swinton and Tom Hiddleston, into a poetic haze in Only Lovers Left Alive. But where that film wallowed in its dreamy melancholic fervour, The Dead Don’t Die is a different beast, opting to reside in the comical and schlocky spirit of yesteryear’s zombie flicks. It’s kooky, mildly amusing … and unfortunately, a complete misfire.

Hosting a zombie hoard of Jarmusch regulars, this film’s rotting belly is bursting with talent. Police officers Bill Murray, Adam Driver, and Chloë Sevigny are the mainstays at the sleepy town of Centerville, while Tilda Swinton, Tom Waits, Steve Buscemi and others (too many to name) fill out the bit parts. It appears that Jarmusch gathered his regulars and asked them what their most typecast role might be—and boom, that’s your role. Swinton, for example, occupies the etherial witch-like samurai-sword wielding mortician (Doctor Strange, Suspiria, etc.), while Buscemi is yet another cap-wearing wise-cracking redneck (Fargo, Lean on Pete, etc.). So purposeful are the archetypes, it leaves little left to be interested in. I guess that might be Jarmusch’s point, as he painstakingly paints each character with a one-dimensional brush to highlight our insatiable appetite for cookie-cutter characterisation.

But because of this, I found myself caring less and less about the fate of anyone in the small town of Centerville. The fourth wall breaking and events that “go off script” smacked of desperation to solicit my attention. At times it did feel like a deeper subtext might’ve been at play beyond riffing on the usual zombies-equal-consumerism metaphor. When Adam Driver says “This isn’t gonna end well”, I think I know what he meant.

I love Jarmusch’s films, and I will be first in line at his next one. But this zom-com represents Jarmusch’s first genuine dud. The Dead Don’t Die is life Jim, but not as we know it.

The Man Who Killed Don Quixote

It’s been three decades in the making but Terry Gilliam has finally done it! For so long, the spectre of cinematic death has loomed large over his project but the fact that The Man Who Killed Don Quixote has been released at all represents a marvel of Directorial tenacity. It certainly was an ambitious assignment, made more so by some spectacular bad luck; illness, floods, financial difficulties and a number of other studio ailments. But finally it’s here and it’s wonderful to see Gilliam having the last laugh…. even if his film isn’t very good.

Quixote is unmistakably a Gilliam film, popping and fizzing with the ex-Python’s eccentric grandeur. A testament to its lengthy gestation, the film runs the stylistic gamut of his back-catalogue; breathing the leathery pungency of Time Bandits, the derailed loopiness of Brazil and the woozy nausea of Fear and Loathing in Las Vegas.

The story (confused as it is), operates as a fevered auto-biopic of a Director’s arm-wrestle with his art. Adam Driver plays Toby, an aspiring feature Director who has been put out to pasture on a diet of advertising work. Cynical of his vocation and struggling for motivation, he relives his past through a chance job located in rural Spain where his career began. The film blurs the lines between reality and fantasy as he reconnects with a village cobbler who thinks he is the famed Don Quixote de la Mancha (played by the wonderful Jonathan Pryce). Toby’s flirtation with Quixote’s delusions leads them both down a comical path of madness and redemption.

Quixote’s grand visual style is undoubtedly mesmerising, but unfortunately the writing bloats a production already struggling to support the weight of its troubled past, unduly hampering it with swathes of incoherence too bothersome to wade through. Indeed, when Driver exclaims midway through the film “This is insane!”, I think he might’ve mistaken his line for a margin note. Alas, Gilliam has clearly suffered from his lengthy stare down this production’s endless rabbit hole. And despite periods of biting comedy and some delightful old-school production heft, this is a project that would’ve been better to have died on the vine. 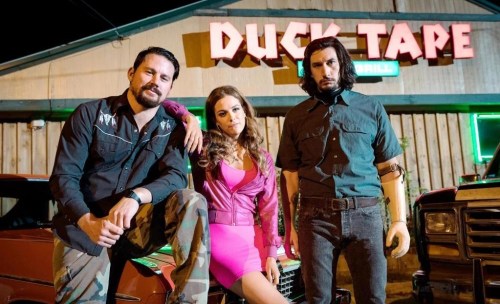 Five years ago Hollywood director Steven Soderbergh (Ocean’s 11,12,13, Erin Brockovich) quipped “If I have to get into a van to do another scout, I’m just going to shoot myself.”  Well, saddle up Stevo, because your so-called “retirement” has come to an end with Logan Lucky.

Set in Boone County, West Virginia, Logan Lucky resembles an Ocean film but with all the knee slappin’ swagger of a West Virginian bar brawl. The Logan brothers, Jimmy (Channing Tatum) and Clyde (Adam Driver), cite a family curse for their bad luck.  Jimmy was a promising American football player until his knee blew out and Clyde lost his arm (or hand, as he insists) on tour in Iraq. Determined to change their bad fortune, they hatch a plan to circumvent (quite literally) the local speedway’s cash takings that are being pumped through pneumatic tubes into an underground vault. Unsurprisingly, an explosives expert is required for the heist—the appropriately named Joe Bang (Daniel Craig) along with his two brothers. After a comically small deliberation on the morals of carrying out the felony (to get the film’s audience onside as much as themselves), their tenuous plan kicks off a riotous regimen of shenanigans and tomfoolery.

Soderbergh is never one to shy away from peculiar production practices, and here he has turned to an unknown writer (to us, at least) to pen this screwball caper. Credited as Rebecca Blunt, the film’s writer is rumoured to be a pseudonym for Soderbergh’s wife Jules Asner, comedian John Henson, or even Soderbergh himself.

Having produced the Ocean’s triplets (and with one in the oven), Soderbergh’s experience in working with an ensemble cast is clearly evident; here the main cast offers solid performances that embrace the film’s tone. However, Logan Lucky is not without its faults; a few heavy handed stereotypes, some pedestrian moments, and forced cameos from Seth MacFarlane, Katherine Waterston, and Hilary Swank, unfortunately derail the film’s momentum and continuity.  There is no doubting that Logan Lucky has a big heart and tries its hardest to be endearing, but it falls a couple of rednecks short of a Lynyrd Skynyrd concert.