Ok, a little rant here on the use of violence in films. I’m talking specifically about violence that does not aid character development, narrative, aesthetic, or an intentional ironic subtext, … no, this is violence simply to pander to the audience and tick a production check box. Such eye candy only serves to satisfy the voyeuristic curiosity of a dumbed down and lazy audience who guffaw at the new and novel ways a person can be mamed. An audience that has to be spoon fed the visual and aubible experience, rather than cogitating the possibilities. Yes, there are violent onscreen characters, and they have to be depicted as such, but the current mainstream habbit demonstrates how today’s audience demand immediate gratification and over explanation. It’s a shame.

I’m not saying that there should not be onscreen violence. It is not the violent acts themselves but the depiction of these acts that I question. It is about context. For example, the violence of the Normandy landings in Saving Private Ryan, are used to shock and bring about the reality of a situation. Violence in James Bond, however, is used in an entirely different way and I would like to contrast Skyfall with its two predecessors, Quantum of Solace and Casino Royale. Granted, these are essentially action flicks, but recent Bond films have demonstrated a desire for corridors filled with baddies lining up to be shot, have their limbs snapped, or necks broken. Skyfall (my hat off to Sam Mendis) demonstrated perfectly how a Bond film can be made to better effect, essentially with the same amount of violence, but handled in a more considered fashion. I site the Skyfall‘s silhouetted fight scene atop an empty sky scraper (pictured below, shot by Skyfall‘s DOP Roger Deakins) as a perfect example of a Bond fight scene handled to maximum effect. A scene that otherwise would have been a dull coreographed bone snapping 30 seconds of nonsensical time wasting washing over the screen.

More often than not a good film teases it audience with “less is more”. Imagination is a far more powerful instrument and can fill in the blanks to greater effect. I am not offended by on screen violence per se … but I am offended by its waste of valuable screen time, and its attempt to speak to me on such simple levels. Violence in films is an exceedingly large topic, one that I’ve only touched on … just thought I’d throw a few thoughts out there. 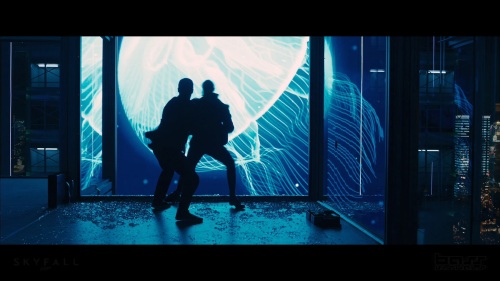