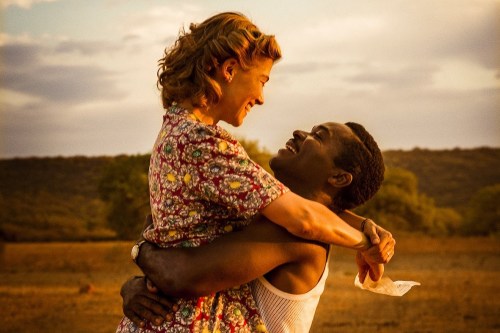 If I am honest I can’t say that I was particularly enthused to see A United Kingdom.  A story of love that ushered in the birth of democracy in Botswana certainly sounds intriguing, yet something in its trailer left me wanting. Nonetheless, a dull trailer sometimes offers the film a gain — as they say, under promise and over deliver.

Set against the backdrop of post-war politics in the forties and fifties, A United Kingdomis based on the true story of the relationship between Ruth Williams (Rosamund Pike), a white salesman’s daughter and Seretse Khama (David Oyelowo), a black Bechuanaland (now Botswana) national who happens to be next in line to the nation’s throne. Racial concerns initially beset their relationship; however, disapproval from the British government as well as Bechuanaland’s current ruler cause further strain later in their marriage. Battle lines are clearly marked out and Seretse’s choice between love and duty is a conundrum that fully hits home in a stirring speech to his people: “I love my people, but I love my wife”. The waters are further muddied by the subsequent forced exile of Seretse which both separates him from his nation as well as the now pregnant Ruth. His desperation to return home sets up the film’s final stanza which thematically explores the conflict between entrenched institutions and progressive change.

Director Amma Asante (Belle) has entered the hostile territory of race relations and politics at a very personal level.  Her ability to tell a love story amidst the political turmoil of fringe post-war politics is handled confidently, and she appears to have drawn very heart-felt performances from Pike and Oyelowo, who both skilfully traverse the fragile path of mixing politics with the personal.

Yet, this very interesting story is let down by a very tame screenplay (by Guy Hibbert) that at times lacks subtlety and unfortunately doesn’t risk any opportunities where a nuanced approach might have worked better. There is no doubt that this is a crowd pleasing film and it appeared to win its audience over … at least in the theatre I was in. Moreover, it certainly engaged me on a personal level. But alas, the mild mannered approach to its political agenda left me wishing it had a little more teeth.