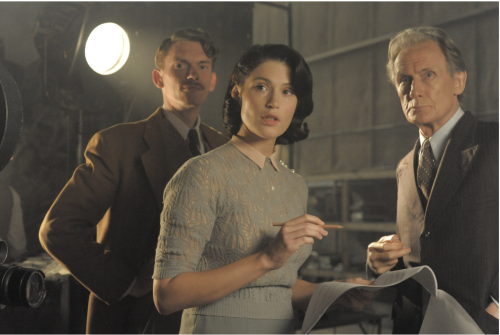 Danish director Lone Scherfig has certainly taken a shine to English stories.  She piggy-backed on Nick Hornby’s screenplay with her 2009 surprise hit, An Education, which brought the wonderful Carey Mulligan to a wider audience; then in 2011 adapted David Nichols’ best selling novel in One Day. Now Scherfig has Gemma Arterton putting on an awkward Welsh accent in a war-time film that has equal measures of romance, drama, and comedy.

Set in London during the Second World War, Catrin (Arterton) accidentally lands a role as a script writer for a studio that is commissioned to make propaganda films that buoy the spirits of the nation. She soon discovers that creating the perfect script means walking a narrow path fraught with the terms and conditions set by the Secretary of War — “authenticity informed by optimism” is their catchphrase. Most notably, it requires that the story be factual, which is easier said than done when Catrin discovers a workable story but from a unreliable source. Oh, and the film must have an American … because “Your film must show your American sisters that this is a war their husbands should be fighting.”  The search for American talent reveals an obligatory chiseled jawed “hero” whose inability to act offers hilarious results as they attempt to make him look “authentic”.

Of course there is the love story that is de rigueur for films such as this.  Catrin’s fellow script writer (and boss) Tom, played by Sam Claflin (Me Before You), waits in the margins while Catrin sorts out the relationship with her cheating husband. Its all fairly predicable, but thankfully not handled with a heavy hand. Their Finest really elevates itself above mediocrity however, in the on-set wrangling of the eclectic bunch of actors who need to work closely with the script writers — one of whom is the charming and affable Bill Nighy. He plays the consummate goof, an actor lost in his art and constantly losing sense of the occasion.

Although predictable in parts, Their Finest remains an interesting story that is delicately laced with an appropriate level of tragedy given its war-time setting. It unabashedly contrasts this with plenty of feminist rhetoric, which on occasion feels a little forced. It certainly isn’t a remarkable film by any stretch, but as a piece of sentimental entertainment it is easily digestible and certainly worth your time, if only just to see Nighy’s delightful antics.