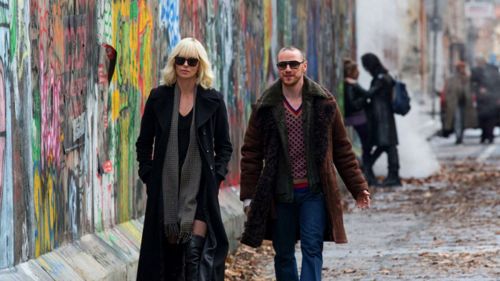 The name is Blonde, Atomic Blonde. Actually, her name is Lorraine which doesn’t have quite the same zing … but other than that, Charlize Theron’s new role may as well be a female Bond (or perhaps more accurately a female Bourne).

It is 1989 and the Berlin Wall is about to collapse, signifying the end of communism in Europe’s East. However, a rogue list naming covert operatives is in the wild and it threatens to halt the pro-democracy movement.  Enter Lorraine Broughton (Theron), a spy for Britain’s MI6 who is sent to retrieve “the list”. Her point of contact in Berlin is David Percival (James McAvoy) and together the two navigate the cagey and violent world of espionage.

Set against a backdrop of graffiti, punks, physical media, and eighties music (including the obligatory Falco and Nena), Atomic Blonde makes damn sure you know it’s the eighties. Cinematographer Jonathan Sela frames the film with a graphic novel sensibility (from which the story originates) and every opportunity is taken to bathe scenes in neon pinks and baby blues.

In his first feature film as Director, David Leitch has employed his background as a stuntman to great effect. Technically there is little to fault the film’s kinetic flair with impressive set pieces and fight sequences that evoke a genuine physicality.

Although we’ve seen this kind of spy story many times over, the film competently negotiates the pitfalls common to the genre; in particular the delicate balance between over or under explaining its many plot complications.  Atomic Blonde’s flashback narrative structure goes some way to alleviate such problems.

Most notably, Atomic Blonde is a comment on the current gender imbalance in spy thriller films (similar to Wonder Woman’s take on the superhero genre). Casting a woman as your protagonist is one thing, but when she excels in what is traditionally a man’s domain, then it becomes a statement. At one point a character who is sympathetic to the old communist regime utters “Women are always getting in the way of progress”—to which Theron’s sharp retort is clearly a rebuke of such antiquated notions.

However, dig a little deeper beyond the style and gender concerns and (like Wonder Woman) we are met with a bog standard genre flick that, while competently handled by its Director, walks a well-trodden path. For some, this will be enough, but others might consider Atomic Blonde to be a little hollow.


You can see my published reviews here.