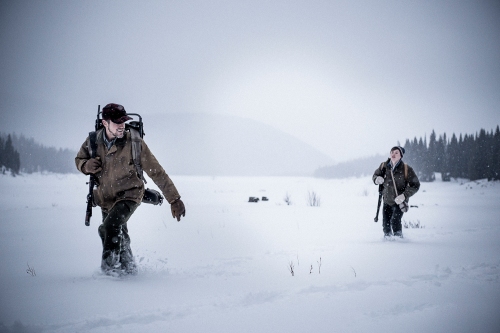 Despite its Grand Jury Prize nomination at last year’s Sundance Film Festival, Walking Out has kept a surprisingly low profile. Adapted and directed by brothers Andrew and Alex Smith, the film is based on David Quammen’s fictional short story of the same name. It centres on a father and his estranged teenage son who head into the wilds of Montana on a hunting expedition.  David (Josh Wiggins) is very much a soft urbanite who conspicuously doesn’t belong among the wind-swept tundra, much to his dad’s annoyance. The two struggle to bond, although Cal, played by Matt Bomer (The Nice Guys), is determined to impart some fatherly advice. Unfortunately, the wilderness can be a cruel mistress and the pair are forced to bond for all the wrong reasons as they find themselves fighting for their survival.

Walking Out deftly balances its pervasive tension with tender moments that insightfully express a father-son dynamic. At one point Cal pontificates “You want so badly for him to know who you are, you could cry”—it is an understated, yet achingly beautiful moment delivered with pin-sharp clarity.  Bomer and Wiggins competently carry the weight of this film’s heavy heart with nuanced performances that feel convincing and authentic.

Walking Out seems content to tell a simple story that avoids deep subtexts or weighty expositions. The Smith brothers have provided a good example of how directorial restraint can be more provocative than the blustering noise of its contemporaries. In its quietness, Walking Out proves to be an elegantly tense story worth wearing out the edge of your seat for. Its soundtrack evokes a haunting cinema of unease that ratchets tension with a discordant score working in chorus with the eerie calls of big game wildlife.  Cinematographer Todd McMullen’s stunning camera work further enhances the films visual style and sketches a mountainous Montana in all its remote beauty.

Walking Out will most likely strike a chord with the fathers and sons in the audience, although the film stands alone as a strong piece of cinema that stubbornly remains in your mind like a limpet.

Read my full review for the NZ Herald here.