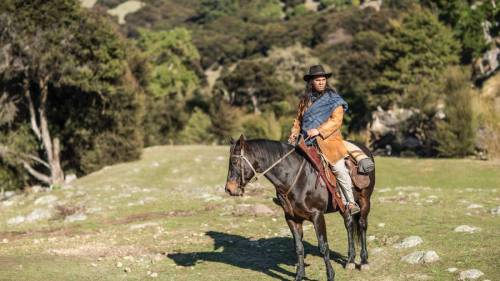 English writer/director Niall Johnson has assembled a multi-national cast for a film that’s an awkward mix of True Grit and Gone Baby Gone. Unfortunately, it lacks the spunk and gravity of either.

Set at the time of Otago’s gold-rush, The Stolen tells a story of prosperity and loss against the backdrop of New Zealand’s wild and beautiful frontier. Charlotte (Alice Eve) and her husband are a wealthy couple fresh off the boat from Oxfordshire, looking to make a new life for themselves in New Zealand.  When her husband is killed and her baby is kidnapped after a botched robbery, Charlotte takes the law into her own hands and sets out to find her missing child. The film presents itself as a bold and punchy tale set among the grime and dirt of prostitutes and gold diggers. However, the tame treatment renders it quite the opposite and it lacks the unbridled confidence to get down-and-dirty with its subject matter. Charlotte’s desperation becomes a poorly drawn “don’t get between a mother bear and her cub” trope and it’ll have you wondering if the robbers stole the script along with the baby.

The relatively talented cast can’t rise above the many cliches which are slathered liberally on a stale loaf of archetypal characters. And while the film takes great pains to make the most of New Zealand’s cinematic landscape, which is, yet again, quite stunning, it struggles to impress in areas that matter. Even the multi-talented Stan Walker’s small part has the unsavoury whiff of tokenism and does little more than offer cultural flavour and plot convenience.

The Stolen tries hard and credit must be given to the noble attempt at creating a female lead with a strong presence in a male-dominated land. But ultimately you’ll leave the theatre feeling that plenty more should have been made of its promising setup.

Read the full review for the NZ Herald here.