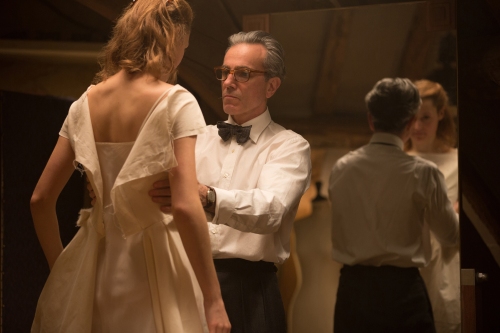 Paul Thomas Anderson doesn’t seem capable of putting a foot wrong.  He is one of the most malleable auteurs currently working with a filmography that spans genres, periods and subject matter, each time garnering critical praise.  The American director’s latest feature, Phantom Thread reunites him with Daniel Day-Lewis, whom he directed to Oscar-winning plaudits in There Will be Blood.

Phantom Thread tells the story of Reynolds Woodcock, a couture dress designer in 1950s London.  Daniel Day-Lewis, in what reportedly will be his last role before hanging up his coat, plays the troubled designer.  It is a perfect role for the method actor, who has completely encompassed the physicality of the part. Cold, calculating, and insular to a fault, Woodcock is only bested by his sister, Cyril (played by a deliciously curt Lesley Manville). She runs the design house and keeps a contriving hand on comings and goings, dismissing people who derail Reynolds delicate routine—this extends to any love interests.

Enter Alma (Vicky Krieps), a waitress at a seaside hotel.  Their chance meeting has a reciprocal effect on their lives. Her doe-eyed innocence is met with an equal measure of stubborn resolve and she seems to melt his heart as quickly as he hardens hers. The two become entwined in a seemingly impossible relationship, the consequences of which become so wrought with tension that the film has to shift into Hitchcock gear to resolve itself.

Like Woodcock’s designs, Anderson has delivered a visually measured result.  A stunning amount of attention appears to have been spent on the film’s look, pace, and sound.  Everything is in place, and like a designer about to send a dress onto the runway, Anderson has made sure every edit is tucked, every pan and tracking shot is folded in nicely, and the sound design ruffled appropriately.  The result is beautiful.

With pitch-perfect performances and an intriguing narrative, this film had me from beginning to end.  Phantom Thread might be a touch too slow and emotionally cold for some, and I suspect the slightly peculiar and unexpected ending could leave a sour taste for those wanting things more conventional.  But for myself, I found the film to be an absorbing battle of wills wrapped up sublimely in a gothic love story.