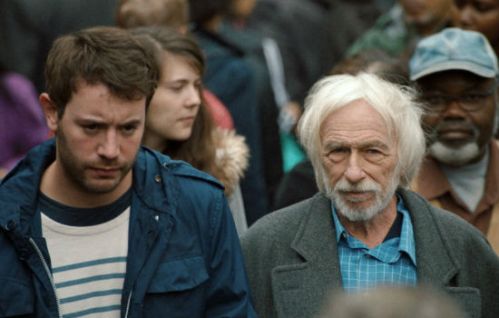 French writer/director Stéphane Robelin (All Together) appears to have developed a penchant for warm-palleted comedies; the kind of light-hearted crowd pleasers that go down well with dinner out and a glass of red.  On first impressions, his latest film—a comical French tale of seduction where old meets new—will have you brushing off your best bottle of Bourgogne Pinot Noir.

French acting stalwart Pierre Richard (The Fugitives, A Chef in Love) lends his considerable talents to the titular role as Pierre Stein, an elderly widower pining for his late wife within the confines of his central Parisian home.  His slide into loneliness and depression is curbed by his daughter, who hires an internet tutor to help him get online.  His new tutor Alex (Yaniss Lespert), a naive doe-eyed lad, finds himself unwittingly complicit in Pierre’s experimental dabbling in dating sites.  Sure enough, Pierre falls for an attractive young woman, Flora (Fanny Valette), who is none-the-wiser of Pierre’s real age. Alex and Pierre end up comically in the deep-end as Alex is persuaded to physically stand in for Pierre’s organised rendezvouses.

As is common to many farcical comedies, the film plays up the disparity between old-age and technology, which is perhaps a little assumptive at times but nonetheless offers some rib-tickling comedy. The film’s strength lies in these moments of situational humour and the complex web of lies and misdemeanours that play out to some wonderfully awkward situations.  However, the film’s lack of attention to character’s other than Pierre and Alex, make this a very male-centric story.  In particular, Flora, who is so poorly drawn that the film begins to feel uncomfortably fetishistic.

The result is a burgeoning romance that feels emotionally hollow and is further let down by its clumsy ending.  Shame, because the intriguing setup had so much promise. Mr. Stein Goes Online is still worth your night out, but I’d advise you leave the Bourgogne Pinot Noir at home.

See my reviews for the NZ Herald and NZME here.