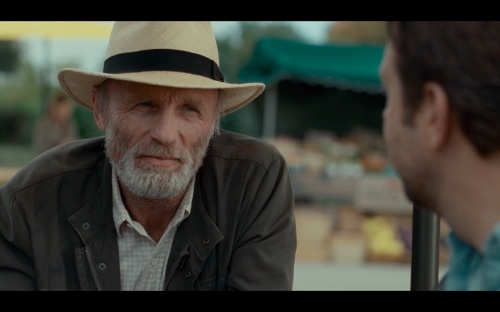 Digital giant Netflix’s bankrolling of a film that champions all things analogue is an anachronism that some might smirk at. Others will nostalgically nod at Netflix whose roots lay in the twilight of physical media.  But when Ed Harris says “We’re strictly analogue here” Kodachrome not only makes clear its belligerent stance on the world’s love-affair with all things digital but also underlines the 35mm celluloid that it was shot on—a rarity these days.

Directed by Mark Raso (Copenhagen) and based upon a New York Times article written by A.G. Sulzberger, Kodachrome explores father-son relations against the backdrop of the titular film stock’s death knell.

It is a pleasantly predictable film that centres on Matt (Jason Sudeikis), a grumpy record exec, who is reluctantly coerced into joining his estranged father to drive cross-state.  His father, Ben (played by the superb Ed Harris), is a renowned photographer who has to reach Kansas before the doors shut for good on the last Kodachrome processing facility in the world.  What adds to the trip’s urgency is that Ben is terminally ill with only weeks to live. His last few cherished roles of undeveloped Kodachrome film provide narrative direction but at its heart, Kodachrome is more concerned with exploring the frail emotional bonds between Ben and Matt.  The always-engaging Elizabeth Olsen (Wind River) plays Zoe who comes along for the ride as Ben’s nurse, and for all the father-son bickering she becomes more a mediator than Ben’s medical attendant.

Ed Harris’s performance can best be described as “nuanced”.  Oh how I cringe at the overused word, but in this instance, it so aptly describes a masterful portrayal that is brimming with subtle shades of expression. Harris sublimely encapsulates Ben’s bitterly cynical demeanour that is fleetingly betrayed by moments of existential joy.

Kodachrome is a warm and beautiful film—Cinematographer, Alan Poon, having made the most of the media it was filmed on. And although it is a touch predictable at times Kodachrome remains an Ed Harris masterclass and worth seeing for his performance alone.