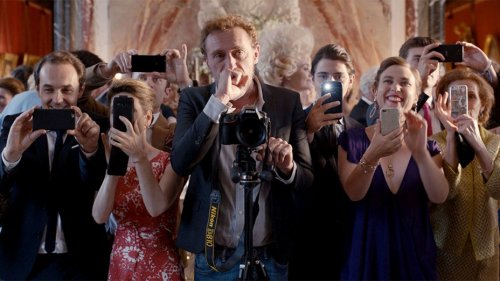 The French have always had a penchant for the cinematic farce.  They do it well.  The only problem is that they are often wordy affairs with a playful rat-a-tat rhythm and if you don’t speak the language you’ll spend most of the movie glancing at the subtitles. Not normally a problem as such films are often visually dry. However, C’est la vie! is juuuust good-looking enough to make the visual aversion frustrating.  And it’s odd to call an attractive film frustrating … but hey, c’est la vie (oh come on, you know I had to use that line somewhere in this review!).

The story centres around a day in the life of Max Angély (played to perfection by Jean-Pierre Bacri). He is a seasoned party planner and owns a successful catering company but tonight’s wedding-job poses a number of problems. Held at a historical 17th-century French palace with circumspect electricity the festivities becomes a delicate dance of power management. His staff add a melange of further concerns; an old flame, a rogue wedding-singer, a short-tempered assistant, and a free-loading photographer are just some of the problems. And then there is the narcissistic groom who wants everything to be “chic and elegant”. What could possibly go wrong?

Directors Olivier Nakache and Éric Toledano (who also wrote the original screenplay) are probably best known for their breakout hit The Intouchables.  Here they have gone wild with some Fawlty Towers-esque antics. The camera weaves and pirouettes (there are hints of Alejandro G. Iñárritu’s Oscar-winning Birdman here) throughout the film’s large ensemble cast. There are, in fact, so many interesting characters that the film risks spreading itself too thin.

Thankfully, Nakache and Toledano have orchestrated a well-paced balance of comedy and sentimentality, not least due to its mainstay, Jean-Pierre Bacri.  His role as the ringmaster of an over-bloated and pompous circus-of-a-wedding provides the glue that keeps it all together. C’est la vie! is as charming as it is ridiculous and deservedly elevates itself from the pack. I just wish I could understand French.

See my reviews for the NZ Herald and NZME here.