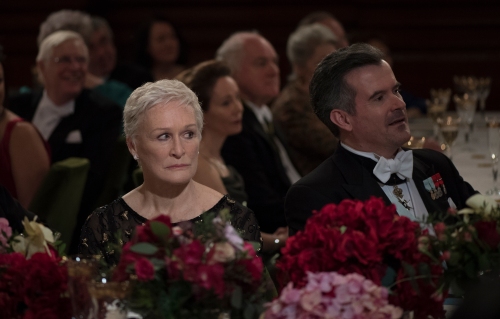 Behind every great man, there is an even greater woman pissed off she’s not getting the recognition she deserves; which in a nutshell sums up Meg Wolitzer’s provocative novel. Adapted for the screen by Jane Anderson (Olive Kitteridge), The Wife pits the forces of traditional marital dynamics against a lop-sided distribution of talent.

When American author and Nobel laureate nominee Joe Castleman (Jonathan Pryce) learns of his impending award, he gleefully prepares a jaunt to Stockholm, family in tow. His wife Joan (Glen Close), also a talented writer, has long since packed away her typewriter in order to fan the flames of Joe’s successful career. On the eve of what was to be a celebration of his literary work, Joan confronts the widening cracks in their marriage; cracks that threaten to expose the secret they both hide.

Unsurprisingly, the film’s success hinges mainly on the role of its protagonist. Glen Close applies her breadth of experience to deliver a superb performance that encapsulates a heady mixture of humility and rage in the face of a hidden injustice. The film’s plot twist is not too difficult to decipher, although The Wife excels through the immutable pace at which it is delivered.  It is the kind of steadfast reveal that will have you second guessing if what you think is happening, will actually come to pass.

Glen Close is wonderfully (and perhaps ironically) supported by Jonathan Pryce whose desperate desire to be adored shows a narcissist at the peak of his consumption.  These brilliant performances work well in tandem with Swedish director Björn Runge’s crisp story-telling. His measured cinematic style exposes the undercurrent of inequality and proceeds to calmly grill it under a white-hot spotlight.

Runge credits his audience with enough wits to dig below the film’s gentle nature to ascribe meaning.  And dig you should, because beneath its amiable (and at times quite hilarious) surface is a film that packs the pin-sharp discomfort of feminine rage. It’s the kind of movie that operates as a parable of our times.