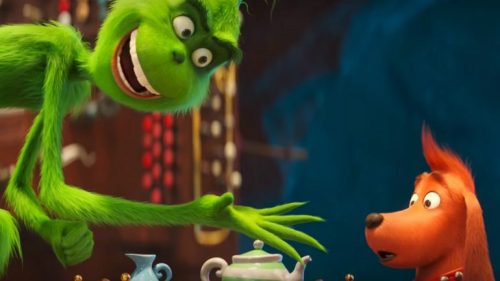 In a cinematic version of hanging your Christmas decorations out too early, The Grinch begs the question of why we need a Christmas story in November, let alone one from the well rinsed Dr. Seuss pantheon. But here we have it.

Directors Yarrow Cheney (The Secret Life of Pets) and Scott Mosier (Eddie’s Life Coach) have pieced together a feel-good film that puts a spotlight on Christmas cheer. Residents of the snowy town of Whoville have decided to turn up their Christmas festivities to eleven.  Enter that ol’ killjoy, the Grinch (Benedict Cumberbatch), to cast the shadow of his lowing brow upon the town’s unbridled optimism. We all know the Grinch’s drill; loner, outcast, grumpy, and Whoville’s seasonal exuberance proves to be one curly ribbon too many. He is, however, not quite the curmudgeon we’ve become accustomed to in previous films.  In fact, when he  complained of rampant consumerism I began to be sympathetic to his plight. His mission to steal the town’s joy (ie. their Christmas presents) sees him, along with his trusty dog Max, embarking on an evening of “righteous” thievery that has far-reaching consequences.

On the surface, the film offers plenty of plucky family entertainment. It has a noble message, and even takes the time to paint the Grinch’s backstory. Visually it’s full of lively action, the animation is snappy and the pallet is bright and attractive. However, Michael LeSieur’s (You Me and Dupree) pallid writing hasn’t done this film any favours. More should’ve been made of the talent on offer and despite Cumberbatch squeezing what he can from the bland screenplay, it remains a story that that lacks depth and wit.

That said, there are a couple of highlights worth noting; Mr. Bricklebaum’s (Kenan Thompson) infectious enthusiasm delivers a few chuckles and the film’s vibrant visuals will no doubt delight the young’uns. But ultimately The Grinch feels like you’ve received one of those practical Christmas presents destined for the sock drawer; soft, dull and lacking in imaginative spark.  Bah humbug.