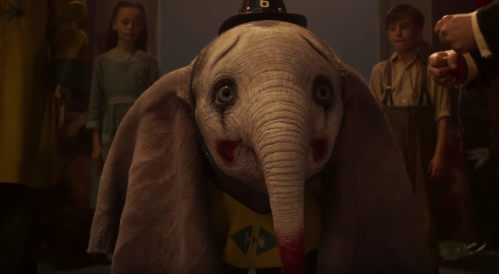 The circus has long been a home for stories about the downtrodden and marginalised who find commonality under one canvas roof. Here Director Tim Burton (Edward Scissorhands) has put his own spin on the well-worn trope and remade a fresh version of Disney’s beloved animated classic.

That said, there is plenty to recognise Dumbo as a typical circus tale. The main character is a one-armed war-vet-come-circus-hand (an eyebrow-slanting Colin Farrell), who along with his two children care for an impossibly cute baby elephant with unfeasibly large ears.  So large in fact, that Dumbo’s airborne antics (yes, he learns to fly) catch the eye of a rival entrepreneur whose nefarious plans threaten to permanently separate Dumbo from his mother.

But at the film’s heart is the flapping pachyderm himself. Burton effortlessly ushers us across the digital divide and turns a synthetic soul into something real, thanks in part to an effects team who have done a stunning job at creating Dumbo’s complex array of expression. “Find the eyes and you’ll see the soul” as the saying goes and the result here is an enchanting character that bleeds pathos with every blink.

Although anthropomorphised animals mightn’t be everyone’s cup of tea, Burton’s version of Dumbo is ultimately a human story that speaks across generations. Young and old will find tears and laughter here—certainly, this reviewer and three twelve-year-olds in tow seemed to run the gamut of emotions. And despite a few underdeveloped characters and a score that occasionally gushes like a broken mains pipe, Dumbo is a tissue factory worth of sadness dried by a big-top of colourful delights.