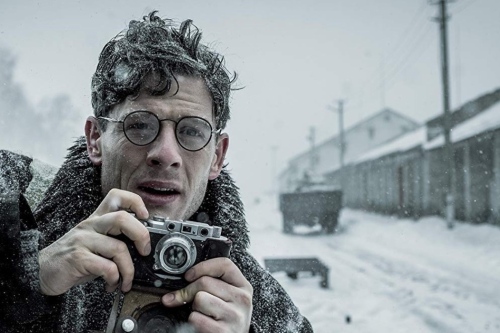 Back for its theatrical release following a rather quiet response at last year’s NZIFF, Mr. Jones feels like a timely reminder of today’s unrelenting flow of fake news.

Set in the early 1930s, Mr. Jones is based on the true story of Welsh journalist Gareth Jones (played by Bond candidate, James Norton), who ventured into the maw of Stalin’s genocidal starvation of the people of Ukraine. His eyewitness account of Holodomor (as it is known by) contradicted the dominant narratives flowing out the Soviet Union at the time—stories that the west was willing to accept in favour of burgeoning trade opportunities. Yet despite Jones’ vociferous protests his words continually fell on deaf ears.

Spearheading this tale of injustice is a suitably odious Peter Sarsgaard (An Education) who slithers into the frame as the Pulitzer winning Walter Duranty, New York Times’ patsy to Soviet interests. His decision to favour hedonism over truth represents the sickening number of political players who turned a blind eye to Stalin’s atrocities.

In contrast, a sympathetic George Orwell (played by Joseph Mawle) pops up intermittently to hear Jones’ concerns—burdens that would later be famously reworked into his opus, Animal Farm. These interludes may seem a tad superfluous at times, however this insight into Orwell’s politically driven narratives serve to highlight Jones’ frustration in convincing the political establishment to accept his ground-level reporting as fact.

And it is at ground-level and in Ukraine’s frozen tundra where this film operates best. Oscar-nominated director, Agnieszka Holland (Europa Europa, In Darkness) has crafted a bleak and desperately lonely vision of Holodomor that appropriately hits home the horrors of Stalin’s atrocities.

Not without a few flaws, most notably Jones’ “obligatory” love interest with New York Times employee Ada Brookes (Vanessa Kirby) whose character, while softening an otherwise all-male cast, does little to further the film’s cause. Some might also wonder if a trimmer, more focussed, version of Mr. Jones lives inside its slightly bloated 141 mins running time. Small quibbles for what is otherwise a gripping history lesson.