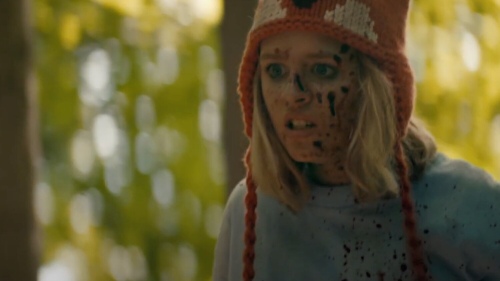 What happens when a petulant teen unloads a rage-filled can of kick-ass on some baddies? Becky happens. That’s the kind of feel-good revenge-swagger that director’s Jonathan Milott and Cary Murnion (Bushwick) want you to feel in their latest action-thriller. Unfortunately, aside from the occasional chunk of slasher thrills and a notable performance from its lead, Becky isn’t going to be the cult film they want it to be.

Kevin James (Paul Blart: Mall Cop) heads up a quartet of swastika tattooed prison escapees hell-bent on retrieving a mysterious key that will unlock their master plan (a macguffin that never fully reveals itself). Unfortunately for them, the key has fallen into the unsuspecting hands of thirteen-year-old Becky—a resourceful little viper who luckily is out of the house when the crims arrive. The film moves swiftly through the gears of sub-genres; hostage thriller, slasher, revenge, even a hint of body horror makes an eyeball-amputating appearance as Becky proceeds to go all Rambo on her assailants. There is an uneasy mix of Stallone and Macauley Culkin as she unloads a blood-curdling tirade of cobbled-together weapons made from household items. I’d be lying if I said it wasn’t satisfying seeing neo-nazis get their comeuppance. Unfortunately, it should’ve been more so, as Kevin James is woefully miscast here. His many roles as the cuddly comic may have tarnished his chances to play a bad guy and I struggled to remove the mall-cop from the neo-nazi.

Becky does, however, contain plenty of nice formal flourishes with some clever cross-cuts that deliver flash-points of tension, but it unfortunately loses steam over the course of the film. Racial undertones are never fully explored and the script begins to show cracks. And while Lulu Wilson (Annabelle: Creation) brings plenty sass to her role as Becky, its not enough to rescue what is otherwise a run-of-the-mill gore-fest that will satisfy only fans of the genre.