After a well-received run at last year’s NZIFF, 20th Century Women finally gets some more big screen love. Brimming with warmth and wit, this enlightening if slightly meandering tale provides plenty of post-viewing conjecture to unpack.

Written and directed by Mike Mills (Beginners), one might ask how is it that a male is telling women’s stories—as the title suggests, this a film about 20th Century Women, right?  Well, not exclusively; it has a soft-natured feminist slant which develops further to show how female stories are often inextricably connected with male stories. 20th Century Women is loosely a biopic based on the real-life women who influenced Mills and is, in a sense, an ode to these women written by the man they helped shape.

Set in 1979, the film centres around a quintuplet of characters who all live in the same house. At the coalface of motherhood is Annette Bening who plays Dorothea; landlord, single mother, and compassionate matriarch who is struggling with what it means to bring up a son in a society bristling with cultural change. Likewise, her teenage son Jamie (played by Lucas Jade Zumann) has to endure the conflicting and bewildering world of advice and desires.

Dorothea’s large multi-story house is a do-up; boarder William (Billy Crudup) earns his keep by assisting with renovations. The other boarder is Abbie, played by the likeable Greta Gerwig whose free-spirited nature is pitted against her struggle with cancer.  And then there’s Julie (Elle Fanning), who doesn’t technically live in the house but comes and goes at her whim and sneaks in at night to sleep with Jamie. They don’t have sex, their relationship being purely platonic … at least according to her.

Despite being overly invested in life’s quandaries beyond its due, this earnest tale is liberally littered with enough existential insight and astute observations to be an enlightening and rewarding experience. And although it leans heavily on the performance of its superb ensemble cast there’s enough meat on its bones to be well-worth seeing on the big screen.

Greta Gerwig is no stranger to mixing a celluloid cocktail of angsty humour with a twist of social realism. In her sophomore years, the fledgling writer/director/actor was understudy to Noah Baumbach, both bringing about delightful films such as Francis Ha and Mistress America.  With Lady Bird, Gerwig has spread her wings, gone solo, and showed us what a genuine talent she is.

Loosely autobiographical of Gerwig’s youth, Lady Bird is a hilarious yet powerful study of mother/daughter relations.  The film takes great delight in telling this coming-of-age tale in all its nit-picky detail. Christine “Lady Bird” McPherson (Saoirse Ronan) is a fiercely head-strong student in her final year of high school. She is desperate to attend a College on the East Coast because that’s where “culture is … and writers live in the woods”.  Her naive ideals unsurprisingly lock horns with her mother Marion, who thinks she should go to an affordable College in California. Tender moments are laced with comic hostility as the two belligerent personalities are perpetually wrought with tension.

Despite this strain, the film avoids getting bogged down in gloomy sentiments, keeping things buoyant and playful, and yet it never loses touch with the realities of an average family and their enduring flaws.   As such, Lady Bird is an ode to the ground-swell of “normality”—a film about middle America, but could just as easily translate to middle New Zealand.

Although Lady Bird is predominantly Christine’s story, the film really belongs to both her and her mother. Laurie Metcalf delivers a standout performance as Christine’s mum. She runs a tight ship but when things begin to unravel at home the weight of her responsibilities as a mother, wife, and breadwinner come to bear.

It is a superb solo directorial debut from Gerwig, who has managed to get the balance just right—it is smart yet doesn’t feel preachy, is tender yet bristles with humour, and above all feels new and fresh.  Greta, Greta, fly away home … and make another film this good. Please.

On Friday afternoon Seema and I saw Noah Baumbach’s latest film, Frances Ha. This well written original screenplay (by Gerwig and Baumbach) is a feel good film that hits its target perfectly. Not motivated particularly by its narrative, Frances Ha concerns the titular Frances (played by Gerwig) as she stumbles through that period of limbo between studenthood and settling down to a job, relationship etc. It’s a real slice of life that is rich with familiar characters, the kind that we’ve all known or met at some stage in our life. I found this film to be so well weighted in all respects. It is funny, quirky, intelligent, and infectious, yet is careful not to overcook any of these. I’m still puzzled by the odd decision to shoot this character driven film in black and white … although it didn’t seem to detract either so I’ll just leave that well alone.

Frances Ha is a must see!

Afterward we headed out to Cafe Abyssinia in Sandringham for some Ethiopian cuisine. Never had Ethiopian before, but boy it was yummy! Thanks to Nana and Mikee for looking after the kids :0) 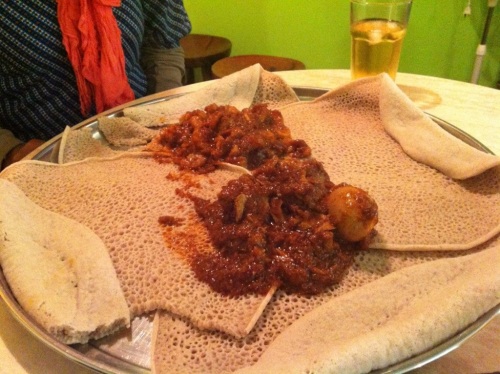