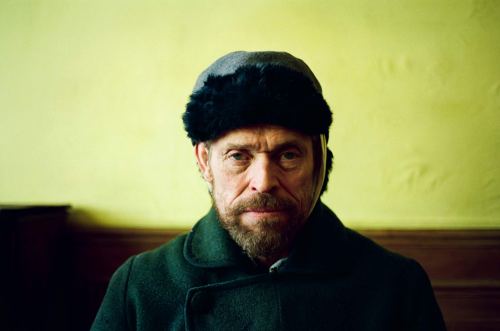 The Diving Bell and the Butterfly director Julian Schnabel’s take on Van Gogh’s life places us deep inside the disquieting mind of the Dutch genius in this film which is part biopic, part fever dream, part expressionist cinema.  It’s mesmerising, if somewhat nauseating stuff; a rich tapestry of movement and colour that feels as painterly as cinema gets.  Attempts to capture Van Gogh’s work through cinema is nothing new, most notably the recent effort, Loving Vincent, which literally painted each frame of his story. But where that film seemed gimmicky (albeit painstaking) here Schnabel’s vision feels authentic and true to Van Gogh’s pursuit to capture light on canvas.

A word of warning, though, to those who suffer the uneasy effects of a shaky handheld camera; this film is constantly on the move, and following Vincent’s crazed exploits through the rural French town of Arles might be a bit much for some. I was both wowed and sweating with motion sickness; a strangely uncomfortable but rewarding experience.

The film traces Van Gogh’s most prolific period but tends to gloss over many of his more infamous exploits, focussing instead on his relationship to his art. Rather than ply us with a forensic understanding of the Dutch master, the film concerns itself more with the world of experience.

Willem Dafoe’s turn as Vincent is spell-binding. His face, itself a richly creased canvas, delightfully communes with the world around him capturing Van Gogh’s’ array of anguish and wonderment with an impassioned depth. The excellent supporting cast are worth noting too with Oscar Isaac (as Paul Gauguin) and Mads Mikkelsen (as a consulting priest) bringing two memorable performances.

Ultimately though, the main star is Benoit Delhomme’s (The Theory of Everything) deeply rich cinematography. Undoubtedly, some will find his bold camera work a distracting annoyance and might consider At Eternity’s Gate to be a victim of its own style. Depending on your tolerance, At Eternity’s Gate will linger in your mind or uneasily in your tummy long after viewing.